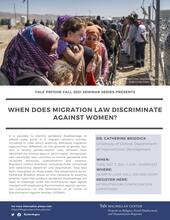 It is possible to identify gendered disadvantage at almost every point in a migrant woman’s journey, physical and legal, from country of origin to country of destination, from admission to naturalization. Rules which explicitly distribute migration opportunities differently on the grounds of sex/gender, such as prohibitions on certain women’s emigration, may produce such disadvantage. Women may also, however, be disadvantaged by facially gender-neutral rules. Examples of indirectly disadvantageous provisions include those which classify certain forms of labor as either ‘low’ or ‘high skilled’, using this categorization to distribute migration opportunities differentially. Such rules may disproportionately affect the mostly female workers whose labor in certain fields is considered ‘low-skilled’ in comparison to that undertaken by their predominantly male, ‘skilled’ counterparts. Scholars have identified the diverse ways in which states’ immigration and nationality laws continue to involve gendered and racialized exclusion, subordination and violence. Migration control practices, including those concerned with deterrence, detention and deportation, have also been impugned on these bases. The presentation by Dr. Catherine Briddick draws on this literature to examine whether rules that produce gendered disadvantage are open to challenge under the international legal regime charged with eradicating discrimination against women, the Convention on the Elimination of all Forms of Discrimination Against Women (CEDAW). Particular attention will be paid to the protection CEDAW offers, or purports to offer, to women seeking international protection.
Catherine Briddick is the Martin James Departmental Lecturer in Gender and International Human Rights and Refugee Law at the Refugee Studies Centre (RSC), Department of International Development at the University of Oxford, UK. She is also the Course Director for the MSc in Refugee and Forced Migration Studies at RSC and the Principal Investigator of Undoing Discriminatory Borders.
Dr. Briddick has over ten years’ experience researching, providing legal advice and engaging in legal advocacy on issues relating to gender, forced migration and human rights in the UK. She has practiced as a barrister, representing individuals before Courts and Tribunals in addition to having managed and delivered legal advice and information services in the not-for-profit sector.
She received her Master of Laws (Legum Magister) in Human Rights Law from the London School of Economics with Distinction. Her doctoral research, undertaken in the Faculty of Law at the University of Oxford, focused on migration status and violence against women to evaluate four selected ‘regimes of exception’. Her work has been published in journals including Social & Legal Studies and the Journal of Immigration, Asylum and Nationality Law. She has also contributed chapters in books like ‘Research Handbook on International Refugee Law’ and ‘The Oxford Handbook of International Refugee Law’, and written in several platforms including The Conversation and the RSC’s Rethinking Refuge.