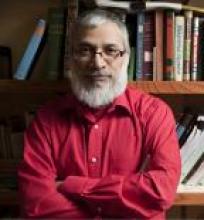 Shawkat M. Toorawa is Professor and Chair of Near Eastern Languages and Civlizations. He received his B.A., M.A., and Ph.D. from the University of Pennsylvania. He has taught Arabic at Duke University, medieval French literature and Indian Ocean studies at the University of Mauritius, and Arabic and other literatures at Cornell University. He has also worked in a family import/export company in Kuala Lumpur and Port-Louis. He joined Yale as Professor of Arabic in 2016.

Toorawa’s scholarly interests include: classical and medieval Arabic literature, especially the literary and writerly culture of Abbasid Baghdad; the Qur’an, in particular hapaxes, rhyme-words, and translation; the Waqwaq Tree and islands; Indian Ocean studies, particularly Creole literatures of Mauritius and the Mascarenes; modern poetry; translation; and SF film and literature.

His books include: Interpreting the Self: Autobiography in the Arabic Literary Tradition (2001), co-authored with the RRAALL group; Ibn Abi Tahir Tayfur and Arabic Writerly Culture: A ninth-century bookman in Baghdad(2005, paper 2010); a critical edition and translation of Adonis’s A Time Between Ashes and Roses: Poems (2004); the reference work, Arabic Literary Culture: 500–925, co-edited with Michael Cooperson; the edited collection, The Western Indian Ocean: Essays on islands and islanders (2007); an edited anthology, The City that Never Sleeps: Poems of New York (2014); and a critical edition and collaborative translation with the editors of the Library of Arabic Literature of Ibn al-Sa‘i’s Consorts of the Caliphs: Women and the court of Baghdad (2015).