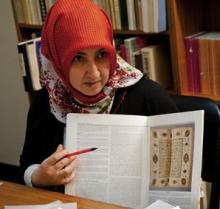 Ozgen Felek is a lector of Ottoman and Modern Turkish. She holds two Ph.D. degrees, the first from Fırat University in Turkey in classical Ottoman poetry (2007) and the second from the University of Michigan with emphasis on Ottoman dream culture and Sufism (2010). Before joining Yale, she was a Postdoctoral Research Fellow at the Graduate Center of the City University of New York (2013-2016), and a Mellon Postdoctoral Fellow in the Department of Religious Studies at Stanford University (2011-2013).

In addition to Ottoman and Modern Turkish, her teaching and research interests include literature, gender, sexuality, and Sufism in the Ottoman Empire. Felek is also an accomplished artist of Islamic illumination and miniature painting. She has been painting since 1989, and she taught this art at the Fırat University Youth Educational Center (FUGEM) in Turkey, at Community High School in Ann Arbor, the University of Michigan, and Stanford University. In her work, she combines modern performing arts and Islamic literature in order to introduce the major literary works of Islamic literature to students and non-specialist audiences in the Western world. The performances she produced can be seen here: http://www-personal.umich.edu/~felek/beautyandlove/.

In addition to articles, her publications include two co-edited volumes, Victoria Holbrook’a Armagan (in Turkish, 2006), a collection of essays on Ottoman literature in honor of Victoria R. Holbrook, and Dreams and Visions in Islamic Societies (2012), a collection of articles on the Islamic dream culture. Recently, she also published a text edition of the dream letters of the Ottoman Sultan Murad III (r. 1574-1595), Kitābü’l-Menāmāt: Sultan Üçüncü Murat’ın Rüya Mektupları Giriş-İnceleme-Metin (“The Book of Dreams: The Dream Letters of Sultan Murad III Introduction-Analysis-Diplomatic Edition”). It includes the transliterated text along with an introduction dedicated to the analysis of the mystical content and philological aspects of these dream accounts. With Prof. Walter G. Andrews, she has been translating these letters into English as well. Although this translation will be published in a book form, the first 100 letters were published digitally under the title, “The Sultan’s Dreams Project,” as part of the Newbook Digital Texts Project, which can be found here: http://depts.washington.edu/ndtwp/sultansdreams/. She is currently working on a monograph on Sultan Murad III and a book project on the construction of manhood and masculinity in the Ottoman court.

“Epilepsy as a Contagious Disease in the Late Medieval and Early-Modern Ottoman World” in Plague and Contagion in the Islamic Mediterranean (ed. Varlik, Nukhet), ARC Humanities Press, 2017, pp. 155-176.