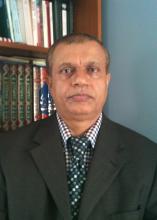 Dr. Muhammad Aziz is a Senior Lector in Arabic. His pedagogical approach involves particularly the integration of new ideas and methodologies that may contribute productively to enhancing the linguistic, communicative, and cultural competencies of learners. He regularly participates in national conferences on the teaching of Arabic as a foreign language. He has published Religion and Mysticism in Early Islam: Theology and Sufism in Yemen, I.B.Tauris, 2011 and currently working on a translation of some medieval treatises written by Ahmad bin Alwân (d. 1266). Dr. Muhammad Aziz and Dr. Jonas Elbousty have worked on Advanced Arabic Literary Reader, published by Routledge in 2016. Dr. Muhammad is also a board member of both the National Yemeni Arab American Association (NAYA) and The Yemeni American News.

The Epistles of Aḥmad b. ’Alwān
Muhammad Aziz
2021

Aspects of Arabic Culture: The Yemeni Proverbs of the City of Ibb
Muhammad Aziz
2020