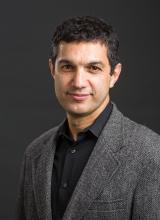 Kaveh Khoshnood is an Associate Professor and Director of Undergraduate Studies at the Yale School of Public Health and aa core faculty member of the Yale Council on Middle East Studies.  He is co-founder of Yale Violence and Health Study Group and an affiliated Faculty member of the Program on Conflict, Resiliency and Health at the Yale McMillan Center.  Dr. Khoshnood is trained as an infectious disease epidemiologist and has more than two decades of domestic and international experience in HIV prevention research among drug users and other at risk populations, including its ethical aspects. Dr. Khoshnood is the principal investigator on a study of “Rapid Assessment and Response to Substance Use and Risk of HIV and other Blood-borne Infections among Lebanese nationals and Displaced Populations in Lebanon” and an investigator on a study “Addressing Disparities in HIV Testing and Care among Displaced Men who have Sex with Men in Lebanon.”  Dr. Khoshnood is also involved in a multi-university project (Collaboration for Health Education in Conflict, CHEC) which provides free, online, academic health science and intensive English language courses to over 500 Syrian medical students inside Syria who live in opposition controlled areas.  Dr. Khoshnood teaches a course at Yale School of Public Health entitled: “Responding to Violent Conflict: Epidemiological Methods & Public Health Interventions” which focuses on how epidemiological methods are applied to understand specific health consequences of violent conflicts, including infectious diseases, mental health, maternal/child health, and chronic health problems. The course has a focus on the Middle East and North Africa region.