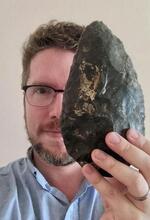 Dr. Ellery Frahm is an anthropological archaeologist whose principal research area is Southwest Asia, spanning from the Eastern Mediterranean to the Southern Caucasus. His PhD research at the University of Minnesota-Twin Cities focused on the Early to Middle Bronze Age transition in Northern Mesopotamia, specifically how mobility and trade changed at the site of Tell Mozan in northeastern Syria in light of environmental changes. Afterward, as a Marie Curie fellow at the University of Sheffield in England, he developed scientific approaches to the study of Eastern Mediterranean material culture in Greece and Cyprus. Since then, he has published research on Paleolithic and Neolithic sites in Syria, Turkey, Lebanon, Iraq, and Iran, and his field-based work has focused on the Southern Caucasus, specifically Armenia and Georgia, spanning nearly half a million years of history. One unifying theme of his research is elucidating how different human groups made use of natural resources distributed across the landscape, how they responded to challenges within their environments, and how the resulting behaviors influenced opportunities for the spread of technological and social change.