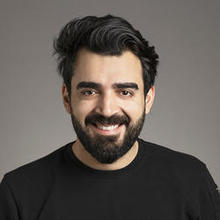 Ahmed Albasheer is an Iraqi comedian, journalist, director, and host of The Albasheer Show, a weekly political satire program that humorizes Iraqi politics. Heavily influenced by comedians Jon Stewart and George Carlin, Ahmed began the show in 2014 as a tool to fight corruption, sectarianism, extremism, and terrorism in Iraq and the surrounding region. Having been banned from Iraqi television station, the show is recorded in Jordan and Turkey and broadcast weekly YouTube, Facebook, and Deutsche Welle’s Arabic channel. It reaches a weekly audience of over 7 million people, the majority of whom area under age 30. Ahmed was born and raised in Anbar, Iraq, fleeing the country in 2011 after suffering injuries by a suicide bomber. He trained as a traditional journalist before switching to political satire, believing the latter to be a more effective tool of communication and influence. Ahmed has been named one of the twenty most influential people in the Arab World by Swiss-based Global Influence Research Centre.