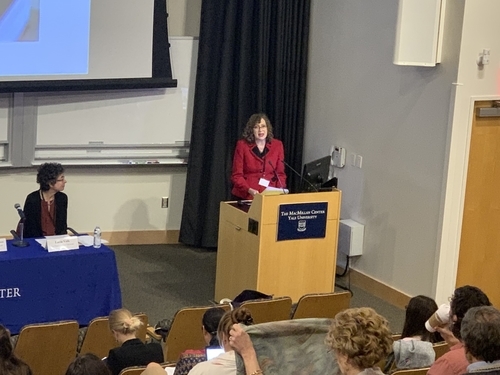 From September 27-29 Marcia C. Inhorn, CMES Chair and William K. Lanman Jr. Professor of Anthropology and International Affairs, hosted the international conference-workshop “(Un)Settling Middle Eastern Refugees: Regimes of Inclusion and Exclusion in the Middle East, Europe, and the United States.” With support from the Department of Anthropology, the Edward J. and Dorothy Clark Kempf Memorial Fund, a US Department of Education Title VI NRC Grant, and the Program on Refugees, Forced Displacement, and Humanitarian Response, the conference brought together for the first time anthropologists who work with Middle Eastern refugee populations and who are examining the cultural, political, and legal regimes of refugee inclusion and exclusion, particularly in Europe and the United States, but also in the Middle Eastern countries where the majority of refugees have fled.

The conference, co-chaired by Prof. Lucia Volk of San Francisco State University, sought to shed light on the experience of recent and long-term refugee displacement across and beyond the Middle East in order to understand how war has affected refugees’ lives and how resettlement in other countries has unfolded. Facing risky and arduous journeys, Middle Eastern refugees have not always been well received by countries unprepared to take them. Even in presumably “safe” havens, refugees have often found themselves trapped in confusing and contradictory webs of immigration policies and asylum laws. Cumbersome bureaucracies and exclusionary politics have forced refugees into waiting patterns that have prevented them from beginning new lives in host settings. Underfunded and understaffed aid agencies often provide only temporary and inadequate support. And increasingly conservative political regimes in many countries have fueled anti-refugee xenophobia, Islamophobia, and outright exclusion. As a result, many Middle Eastern refugees have found themselves abandoned and in limbo—facing life in squalid detention centers and refugee camps and succumbing to food insecurity, physical and mental health problems, discrimination and xenophobic violence, and many forms of structural vulnerability. The conference explored in what ways refugees experience and respond to these challenges.

The work presented generated lively discussion during the Friday public presentations as audience members noted the importance of holding a conversation around this timely issue that is impacting the globe. Participants continued investigating themes of refugee inclusion and exclusion during the Saturday-Sunday workshop devoted to preparing their papers for publication.