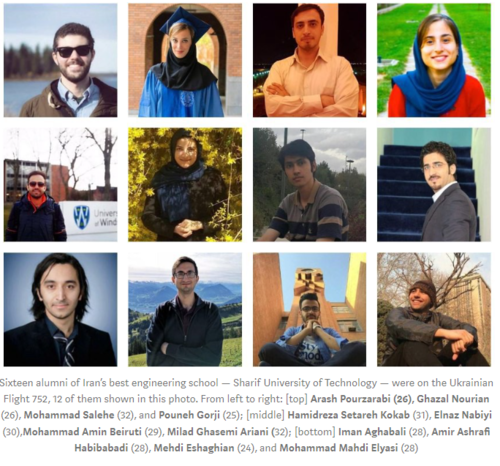 Hearing sad stories about home is nothing unusual for Iranian immigrants. We grow up with fear, tension, uncertainty, and conspiracy theories. Many of us migrate for peace, but no matter how far we get, how long we have been away, and how many passports we carry, we still care about the country we call home, even if we are not welcomed there.

In the Middle East, every day can involve surprises and may be the start of a new chapter of our lives. We have seen wars, lies, corruption, inflation, currency crashes, chaos, controversial elections, assassinations, terrorist attacks, and innocent civilians getting shot or dying in demonstrations, earthquakes, floods, fires and stampedes. We have had classmates getting beaten for their political views and friends imprisoned for mysterious reasons. And we have lost many friends and family members in tragic road accidents.

Plane crashes are not new in Iran either. In the U.S., “97 percent of aviation fatalities occur in general aviation (not commercial flights)”, killing the rich and famous. But in the country under U.S. sanctions, flight accidents take the lives of ordinary Iranians flying commercial planes in an aviation industry that for decades has struggled purchasing new aircrafts and spare parts for its old fleet.

So, the news of a plane crash right after the death of 78 people in a funeral stampede and an earthquake near the Iranian nuclear plants in Bushehr when our country is at the edge of a war with the U.S. under Donald Trump should not technically bother us much. Yet, this story of the Ukraine International Airlines Flight PS752 crash is different for me.

Unlike other plane crashes in Iran, the aircraft in this incident was neither old, nor owned by Iran. The operating company was not under American sanctions and the plane was not shot down by the Americans as the Iran Air Flight 655. The crashed jet was not the fatal Boeing 737–MAX either. So, one cannot immediately blame the U.S. for intentional and direct involvement in this fatal accident.

The Flight PS752 had 176 people on board, including its 9 Ukrainian crew members. The lives of all these innocent people must matter to the world and the cause of their death must be determined immediately through a fair, apolitical, and thorough investigation. As everyone else, I want justice for them all but have no power to reverse the loss of their families.

So, as the politicians and media are playing their typical post-crisis games of accusations, I have been trying to investigate about the Flight PS752 passengers. Who were they and why were they on board?

Where were the passengers from?

The Flight PS752 passengers were from five countries. The passengers’ nationalities were not as diverse as most international flights around the world.

The information released by the Iranians on the nationalities of the passengers must have been based on the passports they used for entering and leaving Iran, reflecting the original nationality of the passengers. Iranian dual citizens must use their Iranian passports to enter and exit Iran. So, they are registered as Iranians at check in. Based on the Iranian media, the flight had 150 (90%) Iranian passengers. The flight had also had 10 Afghan passengers, and majority of them were dual nationals.

The statistics reported by the international media are different and must be based on the passports the dual-citizens on this flight were planning to use at their final destination. Based on the available information, at least 71 passengers of this flight were dual nationals, among them at least 61 Canadians, seven Swedes, and three Britons.

Where were they going?

Flight PS752 was a connecting flight for most passengers, returning to their residence from the new year’s holidays. More than 80 percent of the passengers (138 people) were en route to Canada. The rest were headed to other European destination, including Sweden (at least 17), Germany (at least 4), and the UK (at least 4). (read full article).