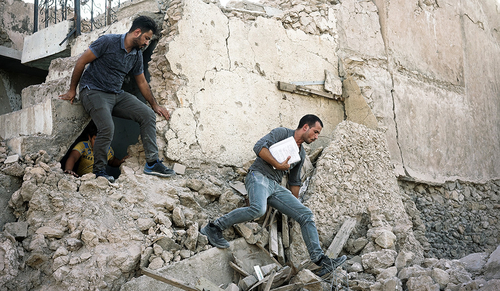 Ben Taub, a staff writer for The New Yorker, will deliver a talk on Thursday, Oct. 31 on the political implications of the United States’ withdrawal from Syria and the current state of Iraq. He will also answer questions about his personal experience reporting on war crimes, human rights, and military campaigns in the Middle East. The event, which is free and open to the public, will be held at 4:30 p.m. in Rm. 129 of the Sterling Law Building, 127 Wall St. It is co-sponsored by the Poynter Fellowship in Journalism, the Schell Center for International Human Rights, and the Yale Law National Security Group.

At The New Yorker, Taub has covered a variety of topics related to crime, conflict, and human rights, specifically in the Middle East, Africa, and Europe (link is external). Recently, he has focused on the war in Syria, including war crimes committed by the Syrian government. His work on Syria was supported by the Pulitzer Center on Crisis Reporting and was the recipient of the Robert F. Kennedy Award for International Print reporting, the Livingston Award for International Reporting, and the Overseas Press Club Award for Investigative reporting. His reporting on Syria was also shortlisted for a National Magazine Award in 2017.

Taub was named one of Forbes magazine’s “30 Under 30” in the media category. His reporting on Iraq’s post-ISIS campaign of revenge won the National Magazine Award for Reporting and the George Polk Award for Magazine Reporting in 2019. His master’s thesis on Belgian teenagers defecting to ISIS became a cover story in The New Yorker in 2015.

The Poynter Fellowship in Journalism was established by Nelson Poynter, who received his master’s degree in 1927 from Yale. The fellowship brings to campus distinguished reporters, editors and others who have made important contributions to the media. Among recent Poynter fellows are Wesley Morris, Ava Kofman, and Sarah Stillman.