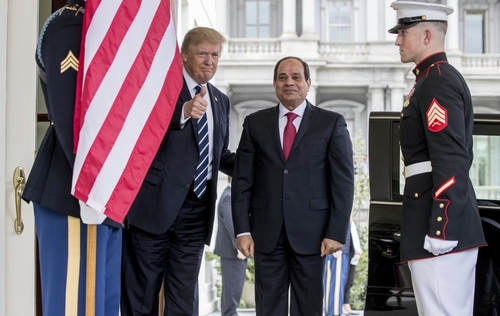 The following Op-Ed written by Elizabeth R. Nugent appeared in the Los Angeles Times on January 29.

Polarization lurks behind many of the political crises that define the current global moment. When political parties and their partisans disdain and disagree with each other, the discord can preclude effective governance and incite violence in the streets.

Polarization leads people of different political views to see the same fact and draw vastly different, even contradictory, conclusions. Over the last decade, polarization derailed Egypt’s brief experiment with democracy in one of the most decisive blows to the Arab Spring.

Ten years ago this month, the Arab Spring arrived in Cairo. Inspired by the Tunisian uprising, millions of Egyptians from all classes, walks of life and political leanings flooded the streets with a euphoric, even dreamlike, camaraderie. Tahrir Square, at the heart of the capital, was a sea of Egyptian national flags, as Muslims and Christians took turns guarding each other from security forces during ritual prayers. Together, Egyptians forced President Hosni Mubarak’s resignation after nearly 30 years in power.

But the hopeful unity of the uprising quickly dissipated after Mubarak’s fall. Polarization cracked the pro-democratic consensus. Through its Freedom and Justice Party, the Muslim Brotherhood dominated at the ballot box but proved unable to govern effectively.

Efforts to draft a new constitution failed when the Brotherhood’s opponents walked out on the process, citing unfair procedures and disagreement over the text. “With the current state of polarization and without reaching an understanding or working together,” an FJP spokesperson warned ominously, “we will reach hell and kill each other in the streets.”

After just one year in office, President Mohamed Morsi of the FJP faced mass protests, met by counterprotests of his supporters. Within days, the Egyptian military capitalized on these divisions and seized power in a coup d’état. With that, Egypt’s democratic experiment was over, and polarization was to blame.

Democratization is a contingent process, and it depends on leaders to make difficult decisions and hard compromises at critical moments. Beset by mutual distrust and intransigence, the Egyptian opposition fumbled an opportunity to forge a path out of authoritarianism. Instead, many opponents of the FJP came to see military intervention as preferable to continued Brotherhood rule. Some even sat onstage in symbolic support of Gen. Abdel Fattah Sisi as he announced the coup.

How had Egypt’s opposition become so divided? Polarization in Egypt was a direct legacy of repression under the Mubarak regime. Between 1981 and 2011, Mubarak ruthlessly suppressed the Muslim Brotherhood while co-opting or tolerating its competitors. This created high levels of distrust and enmity while hardening identity boundaries among the opposition.

Not every country faces Mubarak-style political repression, but the political and psychological processes that splintered Egypt’s political class can happen anywhere. Social psychology tells us that when collective threats harden group identities, a process of group differentiation produces a host of cognitive biases, from in-group favoritism to out-group distrust.

This process unfolds whenever a group of people perceive a threat to their lives, livelihoods or ways of life, especially when politicians exaggerate these threats for political purposes. Ultimately, exclusionary attitudes and behaviors produced through this process are at the core of deepening political polarization.

The derailment of Egypt’s democratic experiment should serve as a cautionary tale to politicians and activists everywhere: Polarization is a serious threat to democracy, and it takes hard work to build trust and find common ground.

Egypt’s 2013 coup brought Donald Trump’s “favorite dictator” to power. Under Sisi’s rule, the country has fallen into an authoritarianism worse than that of Mubarak. Today, the country’s economy is in tatters, its democratic electoral institutions nonexistent, and its police more repressive than ever. The regime has jailed at least 60,000 people on politically motivated charges and sidelined all viable political opposition. The Arab Spring’s heroes now languish in jail or exile.

As more nations veer toward authoritarianism, political elites around the world should remember the harrowing process that ended democratic dreams in Egypt for the time being. So much of that tragedy was a failure to put common values above partisan disputes.

Elizabeth R. Nugent is an assistant professor of political science at Yale University and the author of “After Repression: How Polarization Derails Democratic Transition.”