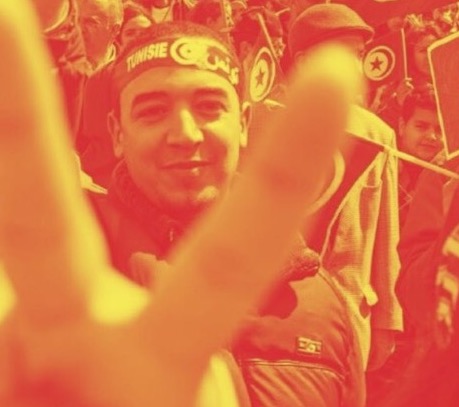 Since 2018 the Council on Middle East Studies has been partnering with Yale’s Pathways to Arts Humanities to bring dynamic Middle East programming to area high school students, as part of CMES’ Title VI Grant from the Department of Education. Organized annually as a series of hands-on workshops both for students and their parents, the CMES-Pathways collaboration, headed by the Council’s Outreach Coordinator, Abdul-Rehman Malik, and Pathways’ former coordinator Sarah Wessler, has built a following of teenagers ready to spend part of their weekend discussing different aspects of Middle East culture, society, and politics.

Topics workshopped have covered a great diversity of history and culture in the region. In academic year 2018-19, for example, students learned how coffee, first popularly used by mystical Islamic orders in the Yemen, is tied to the fortunes of sultans, empires, global trade and social revolution—in short, how coffee as a social beverage originating in the Middle East changed the course of history. Another session focused on youth culture in Iran through the lens of music, particularly Persian hip-hop. Visiting Lecturer Sultan Suood al-Qassemi, founder of the influential Barjeel Art Foundation, led students in a masterclass on the politics of Modern Middle Eastern Art.

In 2019/2020, students participated in a workshop titled “Algiers: Capital of Freedom,” where French Assistant Professor Jill Jarvis used film and literature around Algeria’s struggle for freedom to get students thinking about how colonization has shaped the world we live in and why liberation and decolonization movements are ongoing and still have much to teach us. Former CMES Postdoctoral Fellow, Assistant Professor Beth Derderian, got students thinking about the politics and culture that influence how museum curators choose and use objects to tell a story about the past. Using the Louvre Abu Dhabi museum as an example, this hands-on workshop allowed participants to help curate a room from one of the most fascinating museums in the world.

As will come as no surprise, one of the challenges for current academic year programming has been the Covid-19 pandemic and the fact that programming must happen online. With the zoom burnout many of us have been feeling there was doubt as to the wisdom of organizing more screen time for adolescents, many of whom have only been able to attend school online since March. But CMES-Pathways has forged a wonderful partnership with the NHPS, its administrators, and the local community and we were assured that virtual workshops would offer positive and fun learning outlets during the pandemic.

The inaugural online session on November 14, “Ballots After Bullets: An Election Design Lab,” was put together by current CMES Postgraduate Fellow Daniel Tavana, whose research looks at elections, identity, and comparative behavior in the Middle East, as well as the dynamics of political opposition in authoritarian regimes. The premise of the workshop was, “Revolutions are messy. When the people succeed and guns go silent and rulers fall, what happens next?” Tavana used Tunisia as the test case for participants to explore elections for a nation coming out of revolution, and what is needed to develop solutions for a new democracy. Coming on the heels of the U.S. presidential election, this was a great opportunity for young people to think about the U.S. political system and what about its own electoral process is fair and what might need to change. 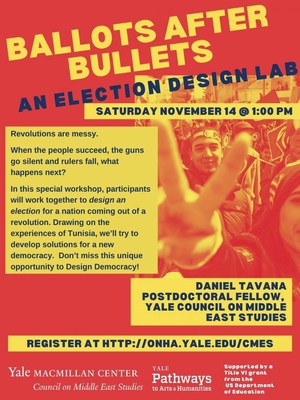 Malik, Wessler, and current Yale undergrads were brought in to assist Tavana as facilitators for the workshop. After an introduction providing facts about Tunisia, the revolution and transitional challenges to democracy, Tavana and the facilitators led a brainstorming session around what makes a country democratic and prompted students to come up with ideas about what kinds of things the revolutionaries had to think about in Tunisia to plan for democracy and elections. Topics discussed included how citizenship is determined and who is allowed to vote, political parties, and protection of minorities.

After the brainstorming session participants were sent to facilitator-led zoom break-out rooms where each group was given a “prompt” which included a short description of the problem/challenge, a testimonial from the field, and a task from the Tunisian transitional authority asking students to provide recommendations as to what should be done with the issue and to provide draft text of an article that will be included in the Tunisian constitution.  A student representative presented back to the larger group on their findings and a summary of the constitutional article they wrote. After the groups reported and discussed their findings, Tavana then spoke briefly about what the Tunisian transition actually decided with respect to the different issues the groups debated.

CMES-Pathways programs have had an excellent participation rate among students in the past, and developed a loyal following. However, we had no way to gauge how many young people would show up to this first online workshop. We were thrilled to get nearly 40 participants. And as we have all discovered with online events, the geographic barriers come down. Students came from as far as New Jersey, Illinois, and Texas, hearing about the workshop through Facebook word of mouth. When asked post-workshop to share their thoughts on the event, one student wrote “I found it very interesting to be able to actually discuss the cornerstones of democracy.” Another commented, “It was interesting to hear other students talk about their thoughts related to today’s society.” Students were especially thoughtful when asked what else they would like to learn about the topic, responding with such ideas as how government works at the local level or how religions and cultures influence governments, whether Tunisia’s new found government impacted countries surrounding it and how it handled coronavirus, and what they can do as individual citizens to contribute to the political process.

“When we set out to design these programs, we knew they had to be compelling for high school students and their families to attend because a two-hour commitment on a weekend isn’t easy to extract,” explains Malik “Why I think we’ve succeeded in developing such a robust audience for this work is that we appeal to what students want: intelligent, relevant sessions that connect to a complicated world that they desperately want to understand better. The focus on examining culture, exploring the impact of technology and connecting with other youth experiences, makes our offerings—for lack of a better word—cool. And along the way, they learn university-level research and analysis skills.”

Fall 2020 closed with another popular offering, “No Laughing Matter! How Comics Reveal the Good, the Bad and the Ugly of America’s Relationship with the Middle East,” looking at the depiction of the Middle East and Islamic cultures in late 19th and early 20th century American comics. The session was so popular that Malik has planned part two of ‘No Laughing Matter’ to close out the Spring 2021 semester. 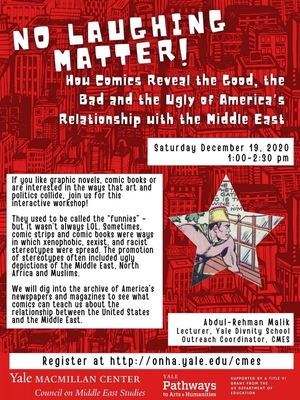 This term will also see workshops led by MacMillan Council on African Studies Postdoctoral Fellow Leslie Gross-Wyrtzyn on the Black Lives Matter movement in Africa, and by CMES Postdoctoral Fellow Vish Sakthivel exploring the use of social media in youth political organizing in North Africa. In addition, since 2018, the CMES Outreach program has been engaging and developing programs for teachers. We look forward to featuring the teacher support and training work in a forthcoming article.