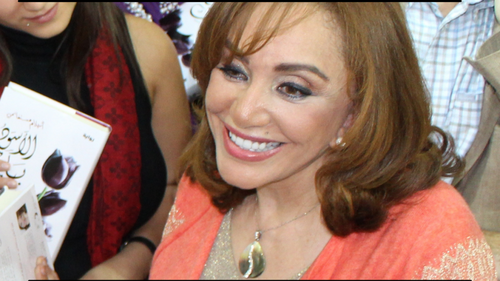 Bestselling Algerian novelist and poet Ahlam Mosteghanemi began publishing in the 1970s and remains one of the most popular and beloved authors writing in Arabic. She is also winner of the 1998 Naguib Mahfouz Medal for Literature for her Memory in the Flesh, also translated as The Bridges of Constantine by Raphael Cohen. Her Chaos of the Senses (tr. Nancy Roberts) and The Art of Forgetting (tr. Raphael Cohen) are also in English translation. Here, she talks about her long literary career and the reasons why she wrote not in French, but in Arabic:

Part of this interview also appeared in Arabesque magazine*.

You belong to an earlier generation of writers who were lucky to learn Modern Standard Arabic, as it was not allowed by the French colonizer. It seems that your preference for Arabic has a literary and political significance in your journey as a person and as a writer. Is that right? If so, could you please explain your motives behind this preference? What does it mean to you?

AM: Arabic was my father’s choice, not mine; he wanted me to avenge him, as he was deprived of learning it by the French colonizer, who declared war on the Arabic language as a way of stripping Algerians of their identity. My father was very fluent in French; he loved French literature and philosophy, but he always felt alienated because he did not learn Arabic. In the sixties, after independence, when my father enrolled me in the first Arab school for girls in Algeria, it never crossed his mind that he was choosing my destiny. For my father, choosing Arabic was a conscious political decision, but for me, it was my father’s will that I was keen on fulfilling.

Although I have a great command of  French, Arabic is the language of my heart and the voice of my faith. I do not know how else to say ‘I love you’ except in Arabic. I also love French poetry, but I can only write a poem in Arabic. Likewise, I love French songs, but I only enjoy listening to classical Arab music. Arabic is the language of love; unfortunately, this is what people in the West ignore. No other language has 90 synonyms for love, differentiating its degrees. It is also the language of meticulous description because of its rich lexicon.

Would you say that your choice of writing in Arabic was an important factor behind your success as an Arab woman writer? Are there any other factors?

AM: Let’s be honest, luck can sometimes play an important role in achieving success, no matter how talented the person might be. Time and circumstances might have helped me at the beginning of my career. In the seventies, an era abounding with poetry, I was the first Algerian woman to write poems in Arabic. Back then, while most themes in literature revolved around war casualties, I, unlike others, decided to write love poetry, which was a challenge I was willing to take up. Moving to Beirut at the beginning of the nineties was another significant time in my career, as I managed to publish my first novel, Memory in the Flesh, whose success, engulfing the Arab world, was unexpected. Arab readers and literary critics were astonished, wondering how an Algerian woman could have such a talent in publishing a work of fiction, given that France had deprived Algerian citizens of their right to learn Arabic for more than a century.

I think Memory in the Flesh paved the way for a new genre in writing, combining fiction and poetry and becoming a vehicule for voicing untold stories, eschewing the machine of censorship. This premeditated strategy has made my work accessible to a wider readership.

You and Assia Djebar are considered two of the most important writers in Algerian fiction in the 20th century; however, unlike Djebar, who immigrated to France as her way to protest against the Arabization policy —  a decision taken by President Boumedien to Arabize humanities and social sciences in the Algerian universities —  you have kept writing in Arabic. You have also launched a literary prize in the name of the late Algerian novelist Malek Haddad, who decided to stop writing in the French language after the independence of Algeria. Hasn’t this decision decreased your chances from achieving worldwide success?