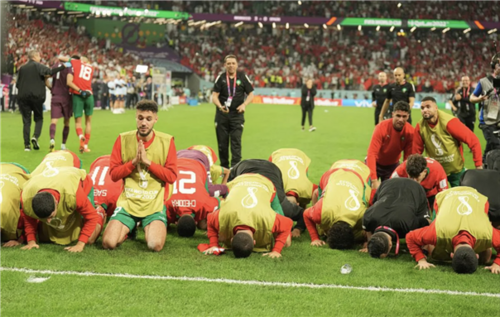 Over the past two weeks, Moroccans worldwide have been on a wild ride as their team pushed far into the 2022 World Cup elimination stages. In the round of sixteen, the heroic saves of the Montreal-born and Casablanca-grown Moroccan goalkeeper, Yassine “Bono” Bounou, and the Madrid-born Achraf Hakimi’s exquisite panenka penalty kick sealed Morocco’s victory over Spain in a dramatic shootout against their cross-Strait of Gibraltar rival of the day.

Then, last Saturday, Moroccans endured the longest seven minutes of their lives. In the first half of the World Cup quarter-final match against their other Iberian football powerhouse neighbor, Fez-native, Youssef En-Nesyri, had put Morocco’s Atlas Lions up 1-0 with a perfectly timed run and leap to head the ball down past Portugal’s goalie. But, three minutes into the ten minutes of extra time, the Moroccan side went down a man after their Italian-born forward, Walid Cheddira, was questionably ejected after two rapid yellow cards. Clinging to the slim lead, Morocco’s stubborn defense held up against Portugal’s onslaught as the clock ticked down, propelling them to a historic semi-final matchup against France. Battling a raft of injuries, the Moroccan side fought tenaciously but came up short against Kylian Mbappé and the rest of France’s juggernaut.

Despite defeat, the Atlas Lion’s Cinderella run made them the darling and defining team of the 2022 World Cup, the underdog feel-good story of the tournament that has tapped into deep global identification and solidarity. In Qatar, Morocco essentially enjoyed a home-field advantage, with the Education City Stadium crowd in the game against Spain cheering at a volume of 150 decibels - the equivalent of a jet engine taking off - after Hakimi put in the winning shot. And, their victories have set off delirious celebrations from Doha to Tangier, Rabat, and Casablanca to Brussels and Paris, and from Riyadh and Gaza to Yaounde to Abidjan.

Morocco made World Cup history, alternatingly being hailed either as the first “Arab” team to make it this far and reach the quarter-final, and the first “African” team to reach the final four. They carried the hopes and dreams of not only just the Arab world, the Muslim world, or of Africa, but also of many in the Global South, after they defeated one former colonizer, Spain, and turned to face the other one, France. An array of supporters including Jordan’s Queen Rania, Senegalese President Macky Sall, and former African stars like Cameroon’s Samuel Eto’o and Côte d’Ivoire’s Didier Drogba all expressed admiration.

Defying any attempt at either/or categorization, what the Moroccan team captures and embodies is the distinct “both/and” reality of Moroccan global identity, history, and experience. These Moroccan paradoxes and tensions have been on full display in Qatar.