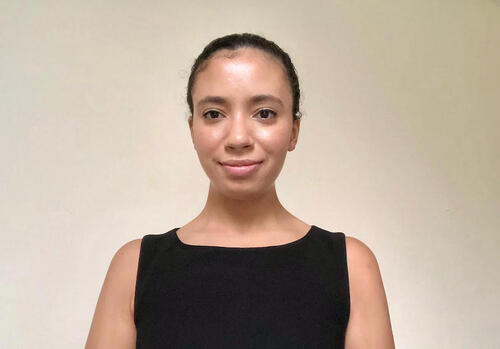 The following interview is part of the Council on Middle East Studies’ Alumni Spotlight series featuring graduates from the Bachelor’s Degree in Modern Middle East Studies. Alejandra Padin-Dujon graduated from Yale college in 2018. She double majored in Math & Philosophy and Modern Middle East Studies and completed the Human Rights program. During her time at Yale, Alejandra studied postcolonial studies, literature, and the Arabic Language. The Journal of Arabic Literature is publishing her senior thesis, “Mutual Adversaries, Fellow Dissidents: Multilingual Dissent from Wattar’s Al-Zilzāl and Djaout’s Le Derner Été de la raison”, in the Journal of Arabic Literature. Alejandra also holds a master’s in International Development from the London School of Economics and worked in the Caribbean on state development and climate change policy. In her free time, Alejandra co-leads the Arabic Language Table at Yale.

My time at Yale was definitely interdisciplinary. When I came to Yale, I did not intend to major in Modern Middle Eastern Studies (MMES). However, I already had an interest in Arabic and the Middle East more broadly. By the time I was a junior, many of the classes I took counted toward the MMES major. I thought it was so cool because MMES allows you to study history, sociology, and languages. I already had an interest in logic as well, and there was some overlap with my other major, Math & Philosophy. For example, I was able to double count the course ‘Islamic Theology and Philosophy’. People told me there’s no overlap in the analytical thinking you need for logic and the type you need for humanities, but I see the connection between math and the philosophical, theological, even historical, and geographical thinking.

MMES furthered my understanding of how colonialism has impacted the political and economic structure and even the social system of many countries in the Middle Eastern-North African (MENA) region. In the MMES major, you will learn about many different histories and many other countries and cultures. I think it’s been critical for international development, and it’s been essential for climate change to understand the role that colonialism has played in the world.

I mostly spent my MMES major studying history, political economy, nationalism, all fundamentals to understanding state formation nation-building. I made an active effort not to study conflict, and terrorism because I feel like that’s overrepresented in Western media. Furthermore, I felt like there’s just so much more in terms of knowledge and in terms of humanity that the MENA region has to offer.

Let’s talk about your senior thesis. How did that come about?

My senior thesis has been a labor of love. It happened by accident. I never saw myself dabbling much in comparative literature, but then it so happened for a scheduling reason that I found myself in a class about postcolonial cities for my senior year at Yale. This class was cross-listed with French because a lot of the texts are actually in French and included a focus on French postcolonial cities. There was a vital MMES component because Jill Jarvis, who taught the class, has a strong interest in North African-Franco subjects.

Through that class, I was introduced to Algeria and literature. I’d already been studying social movements and mythmaking and nationalism and all kinds of things that feed into the idea of Algeria and politics. I enjoyed writing my senior thesis so much that Jill Jarvis told me that I should publish it. But I didn’t touch it for about a year after I graduated. In late 2018, I decided to pick it up again and tried to figure out where I could send it. The process took a long time, but now it’s being published in the Journal of Arabic Literature.

Could you talk a bit about your time after Yale?

After I graduated, I spent a year in Cairo, which was an amazing experience. It allowed me to bring my Arabic up to snuff again because I didn’t learn much Arabic in undergrad. Because I had been an MMES major at Yale, I had an opportunity to learn North African politics, which is not the same as Egyptian politics specifically, but the major gave me the language to think and talk about different kinds of political and social currents that I could see happening in front of me in Egypt. In general, I gained an insight into the political consciousness of the area in MMES. So, that study helped a lot as I was navigating life in Egypt.

When I was considering my next steps, I thought to myself, what do I have to work with? I’ve got languages. I’ve got some math skills. I have a strong interest in international politics and material welfare. When I graduated here, I thought what I wanted to do was study 20th century Arabic political thought about redistribution of wealth, more political theory. As time went on, I realized I wanted to do something to see the impact more. Somewhere among my thoughts, I realized international development would probably be the route for me.

I was admitted to a Master’s Degree program at the London School of Economics and was fortunate to receive support through the global rotary grant from the Rotary Club of New Haven. There, I did work in state development and classical revolution, which tied back to a class I’d taken through the MMES major. (It was a class on reformers and revolutionaries of the Arab world, and it made a big impression on me.) After LSE I got a job at the Department of Environment for Antigua and Barbuda. I’ve worked for them for the past year, and it has been a transformative experience.

I’m interested to hear more about the connection between your work in the environment and your background in postcolonial study. Could you talk a bit more about that?

It’s interesting. The MENA region is wildly understudied both in climate change and international development. It’s shocking. In my experience, I have not met professors who specialized in international development in the Middle East. There’s a lot of study in South Asia, East Asia, Latin America, Sub-Saharan Africa, but there is almost nothing in the MENA Region.

During my time with the MMES department, I had an opportunity to study agricultural reform in Algeria, which is a form of development. That was when the seed was planted, both literally and figuratively. Suddenly, I had an opportunity to research agrarian reform and the different steps that the socialist Algerian government took to try and develop its economy shortly after independence. I didn’t realize it at the time, but now I see how that impacts what I do in environmental work. At Yale, if you wanted to work on state development, it generally happens through political science or global affairs. But I had a unique exposure to Algeria’s agrarian reform and other postcolonial linkages thanks to the MMES major, and I appreciate the opportunities I’ve had afterward which came out of that MMES preparation. I feel like there’s not enough focus on developing vulnerable communities in the face of climate change. There’s a way to support each other and help bolster the political consciousness that responds to climate change.