An Interdisciplinary Conference On Kurdish Politics And Societies 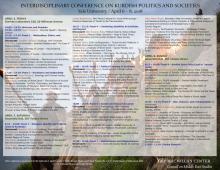 Oppressed in Turkey, Iraq, Iran, and Syria for the better part of the twentieth century, the Kurds have recently come to the fore with full force. With the rise of ISIS and the fragmentation of Iraq and Syria, the Kurds have begun to occupy an increasingly central position in Middle Eastern politics. In Iraq, after decades of rebellion and genocide at the hands of the Ba’ath Party, the Kurds have begun to rise despite some setbacks in the last year. In Syria, Kurds have seized the opening created during the civil war to establish at autonomous zone based on radical leftist principles and gained attention for their bottom-up democratic experiment, women-only battalions, and fierce fight against ISIS. In Turkey, the Kurdish political movement constitutes a formidable force against Erdogan’s party, and the collapse of peace talks with the PKK has resulted in a brutal counter-insurgency campaign in the southeast. Similarly, Iranian Kurds remain a thorn in the side of the Islamic Republic, ever defiant against repeated attempts to subdue them.
The geopolitical rise of the Kurds in the early 21st century is also matched with an increase in academic interest in them. Once limited to Kurdish social scientists and a handful of outside experts, Kurdish Studies has become a much more diverse field in the recent years. An expanding body of scholars is now producing quality work on Kurdish societies and politics, with individual papers and entire panels focusing exclusively on the Kurds at annual meetings of professional organizations such as the Middle East Studies Association. But, in contrast to Europe, there have been few workshops or conferences in the United States to draw together this critical mass of scholarship. We wish to contribute to filling this gap with this conference on Kurdish politics and societies.
The conference brings together academics from various disciplines working on a range of themes related to Kurdish politics and society including gender, political economy, states and revolutions, war, identity, and religion. Thanks to the generous support of the Edward J. and Dorothy Clarke Kempf Memorial Fund at the MacMillan Center for International and Area Studies and a U.S. Department of Education Title VI National Resource Center grant at the Council on Middle East Studies at the MacMillan Center, it carries the honor of being the largest ever Kurdistan-themed academic event in the US with 9 panels and 41 presentations.