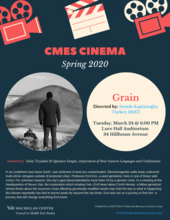 In an undefined near future Earth, vast stretches of land are contaminated. Electromagnetic walls keep undesired multi-ethnic refugees outside of protected cities. Professor Erol Erin, a seed geneticist, lives in one of these safe zones. For unknown reasons, the city’s agricultural plantations have been hit by a genetic crisis. In a meeting at the headquarters of Novus Vita, the corporation which employs him, Erol hears about Cemil Akman, a fellow geneticist whose thesis about the recurrent crises affecting genetically modified seeds may hold the key to what is happening. But Akman reportedly has fled to barren lands far beyond the city limits. Erol sets out on a journey to find him. A journey that will change everything Erol knew.
Directed by: Semih Kaplanoğlu,Turkey (2017)
Hosted by: Selim Tiryakiol & Oğuzhan Yangöz, Department of Near Eastern Languages and Civilizations