Supriya Gandhi is an Assistant Professor in the Department of Religious Studies and works on Islam and Hinduism in South Asia. She completed her doctorate at Harvard University, and has also studied in Delhi, Tehran, London, and Damascus. She is the author of The Emperor Who Never Was: Dara Shukoh in Mughal India (Harvard University Press, 2020). Her current book project explores the role of the Persianate cultural and intellectual ecumene in the formation of modern Hinduism.

Claire Roosien is an Assistant Professor in the Department of Slavic Languages and Literatures at Yale University. She researches the politics of cultural production in the Russian Empire and Soviet Union, with a focus on mass culture and empire in Central Asia. She is currently completing her book manuscript, Socialism Mediated: Culture, Propaganda, and the Public in Early Soviet Uzbekistan. Her work has been published in venues including Central Asian Survey, Iranian Studies, and Kritika.

Shiri Goren is the Director of the Hebrew Program at Yale University, and a faculty member at NELC and the Program in Judaic Studies. She researches contemporary cultural productions with an emphasis on literature and film in Israel/Palestine. Her work has appeared in Jewish Social Studies; CLCWeb: Comparative Literature and Culture; Studies in Israeli and Modern Jewish Society; and Hebrew Higher Education; as well as in the edited volumes: Israeli Television: global Contexts, Local Visions (2021); Teaching the Arab-Israeli Conflict (2019) and Narratives of Dissent: War in Contemporary Israeli Arts and Culture. She is the co-editor of Choosing Yiddish: New Frontiers of Language and Culture (2013). This talk is part of a larger project on cultural representations of women in the IDF.

Marjan Wardaki is Postdoctoral Associate in the Program in Iranian Studies at Yale University. She is an intellectual historian of modern Middle East and South Asia, with research interests in the history of science and migration studies. Her work has been published in Modern Asian Studies, and she is currently working on several articles on Indian vernacular medicine and the history of photography in India and Afghanistan. This talk is from her first book project, which traces the birth of scientific and medical institutions in South Asia through the lens of itinerant scientists and state makers.

Samuel Hodgkin is an assistant professor of Comparative Literature at Yale University. He has published on the modern verse, theater, and criticism of Iran, Turkey, the Caucasus, and Central Asia. He is a co-organizer of the “Cultures of World Socialism” working group, and he is organizer of an upcoming special issue of Comparative Literature Studies on “communist world poetics.” Other articles have appeared in Iranian Studies, Cahiers d’études iraniens, and Cahiers d’Asie centrale. Today’s conversation is on his first book manuscript, entitled Red Nightingales: The Poetics of Eastern Internationalism. 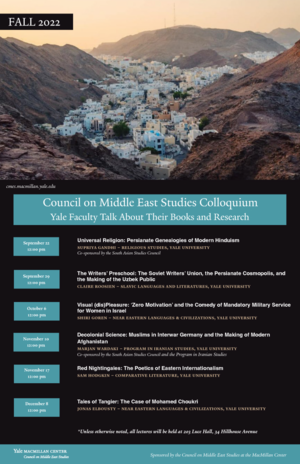