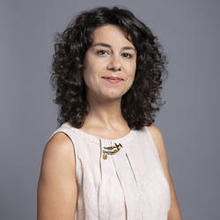 Onur Burçak Belli is a Syrian-Turkish journalist. For most of her career, Burçak has focused on conflicts in Turkey, where she has been based for the past five years, working for Die Zeit, a German weekly newspaper, covering conflicts and crises in Turkey and the broader region. With 13 years of experience writing for international media outlets, her reporting is often through a lense of comprehensive rights and freedoms, writing in feature, long-form, or non-fiction storytelling styles. In 2010, Burçak was based in Damascus covering Syria’s reform plans and the Sunni-Alawite divergences amongst the ruling elite. She then moved London, working for the BBC as a broadcast journalist, before returning to Turkey in late 2013. Her current work reports on a variety of issues including the Kurdish conflict, war in Syria, ethnic and sectarian conflicts, refugees, migration, Turkish foreign policy, EU, civil movements, sexual and bodily rights of women in Muslim societies, nature conservation and water policies, trans-boundary water conflicts, and environmental policies in conflict zones in the Middle East. Burçak is also the co-founder of the Press Research Centre (BAM), an independent civil society organisation, dedicated to strengthening and promoting freedom of the press. As part of her work at BAM, she has been running a database called Press In Arrest, a documentation and collective memory work concerning journalists prosecuted in Turkey. Burçak was the 2018 Feuchtwanger Fellow of Villa Aurora and Reporters Without Borders Germany and speaks English, Turkish, and Arabic.