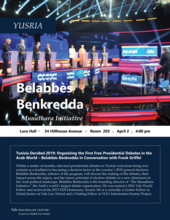 Within a matter of months, televised presidential debates in Tunisia went from being nonexistant as a tradition to becoming a decisive factor in the country’s 2019 general elections. Belabbès Benkredda, initiator of the program, will discuss the making of the debates, their impact across the region, and the future potential of election debates as a new dimension in the Arab political landscape. Belabbès Benkredda is the founding director of “The Munathara Initiative,” the Arab’s world’s largest debate organization. He was named a 2016 Yale World Fellow and received the 2013 NDI Democracy Award. He is a currently a Gruber Fellow in Global Justice at Yale Law School and a Visiting Fellow at YLS’s Information Society Project.