Canceled: CMES Colloquium: The King’s Adviser: Assessing the Role of Experts in the Gulf Monarchies 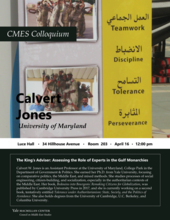 Calvert W. Jones is an Assistant Professor at the University of Maryland, College Park in the Department of Government & Politics. She earned her Ph.D. from Yale University, focusing on comparative politics, the Middle East, and mixed methods. She studies processes of social engineering, citizen-building, and socialization, especially in the authoritarian contexts of the Middle East. Her book, Bedouins into Bourgeois: Remaking Citizens for Globalization, was published by Cambridge University Press in 2017, and she is currently working on a second book, tentatively entitled Tolerance under Authoritarianism: State, Society, and the Politics of Avoidance. She also holds degrees from the University of Cambridge, U.C. Berkeley, and Columbia University.