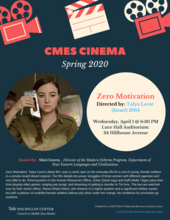 Zero Motivation, Talya Lavie’s debut film, puts a comic spin on the everyday life for a unit of young, female soldiers in a remote Israeli desert outpost. The film details the power struggles of three women with different agendas and very little to do. Pencil-pushers in the Human Resources Office, Zohar (Dana Ivgy) and Daffi (Nelly Tagar) pass their time playing video games, singing pop songs, and dreaming of getting a transfer to Tel Aviv. The two are watched over by their senior officer, Rama (Shani Klein), who dreams of a higher position and a significant military career, but with a platoon of unskilled female soldiers without any drive under her charge, her ambitions for promotion go nowhere.
Directed by: Talya Lavie, (Israel) 2014
Hosted by: Shiri Goren, , Director of the Modern Hebrew Program, Department of Near Eastern Languages and Civilizations